2018 marks the 20th anniversary of the death of Lucio Battisti, one of Italy’s best-loved singer/songwriters. His legacy is kept alive by singer Gianmarco Carroccia who, in late April, marked the anniversary with a live performance of 30 of Battisti’s best-known songs. A Yamaha RIVAGE PM7 digital mixing system mixed the show. 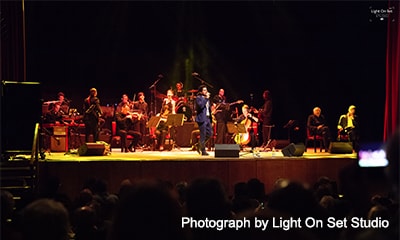 Carroccia’s live homage to Battisti is an annual event, but this year’s show - which took place at the Teatro D'Annunzio in Latina, south-east of Rome - was the first live show for the RIVAGE PM7 recently purchased by Sperlonga-based Remix Sound.

Carroccia sang Battisti’s songs accompanied by a 14-piece classical ensemble. In between each song renowned lyricist Giulio Rapetti (aka Mogol), a long-term Battisti collaborator, was interviewed about their meaning.

Remix Sound owners Michele and Riccardo De Simone are long-term users of Yamaha digital mixing consoles, using a CL5 for Front of House sound on previous Battisti tributes. Having invested in their RIVAGE PM7 system, they were very keen to see how it sounded! 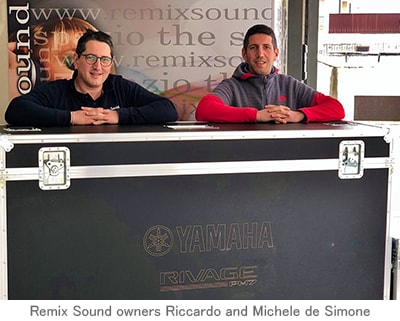 In addition to the PM7, a QL5 console was used by monitor engineer Mimmo Termale, with RPio222, Rio3224-D2, Rio1608 I/O racks and a Nexo GEO S12 PA. A pair of Yamaha HS7W monitors provided nearfield assistance for Michele De Simone, who was the show’s FoH engineer.

“We were convinced that RIVAGE PM7 would be a great console, even without hearing it. When it was delivered we tested it with headphones and studio monitors and were very impressed, but we were both stunned at the sound quality it delivered in a real live situation,” says Michele.

“It was the ideal console for this production. The music and speech were fantastic quality and the Rupert Neve Designs SILK technology really made a difference to the strings, acoustic guitar, trumpet and trombone. RIVAGE PM7 gives us an unprecedented level of audio control and quality.”